This was the biggest room to do…. and also the messiest, but definitely our overall favourite.

The kitchen is the heart of our home, we spend the majority of our time in here. Hubby loves to cook so he’s always in here. Whenever we have friends and family over, everyone is always in the kitchen. This is why I wanted an island so desperately, so people can be sitting with you while you’re cooking or pottering about the kitchen. It’s great for the kids, homework time, tea time, everyone can be together.

See the bottom of this post for a kitchen fitter/designer that I recommend who install UK Wide.

So here is the original kitchen ….. 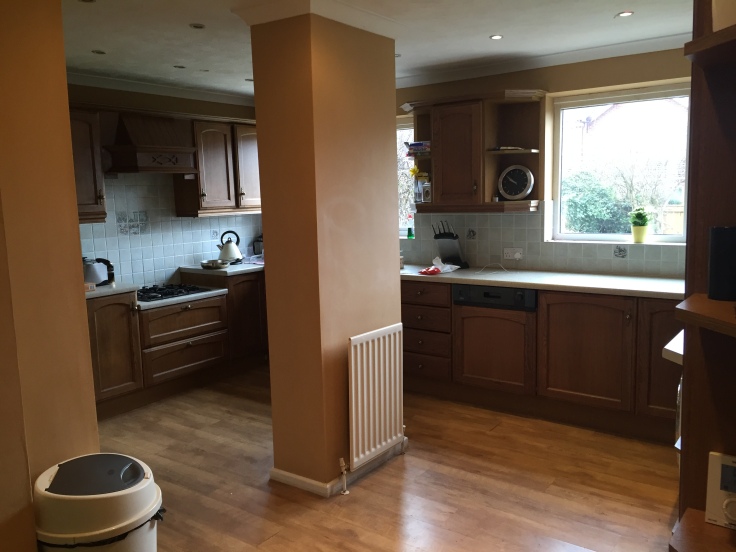 When we moved in we knew that it just had to go! I’ve always dreamed of having an island in the middle of the kitchen and it would never work with this massive wall in the way. Easier said than done to get it taken out though as we soon learned….

Here are some more photos of the original kitchen…. 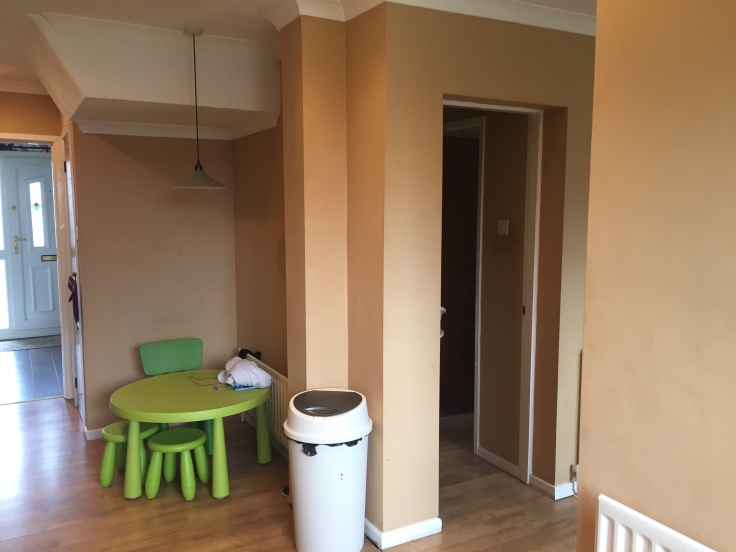 This door leads to a downstairs WC. Most people don’t even know we have one as the door is always kept shut until we can finally get round to renovating it. 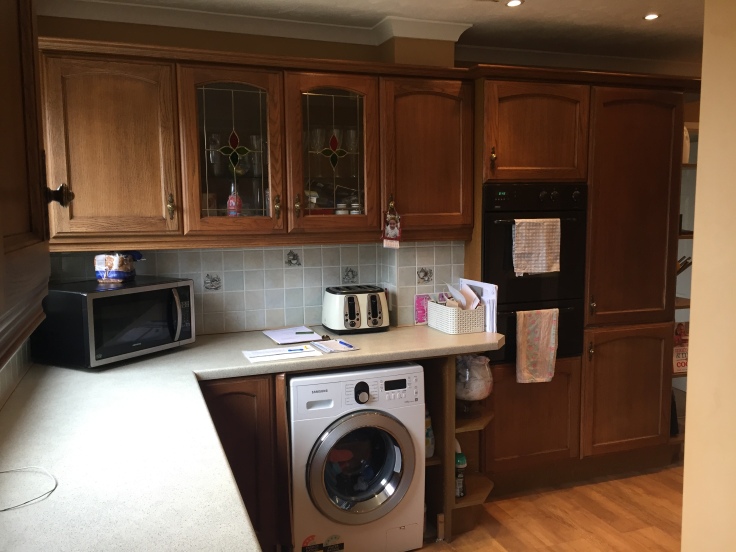 The first job was to get that massive wall taken out. It felt like ages to get everything sorted, we had structural engineers & builders come out to tell us what we needed, drawings made, original house drawings examined…. Backwards and forwards between so many different people. Some people said it needed one thing, others suggested something more. The final decision was that it needed a steel lintel in a T shape to support the back of the house. There was already some support there, but this would be the extra bit it needed so we could knock that wall completely out. 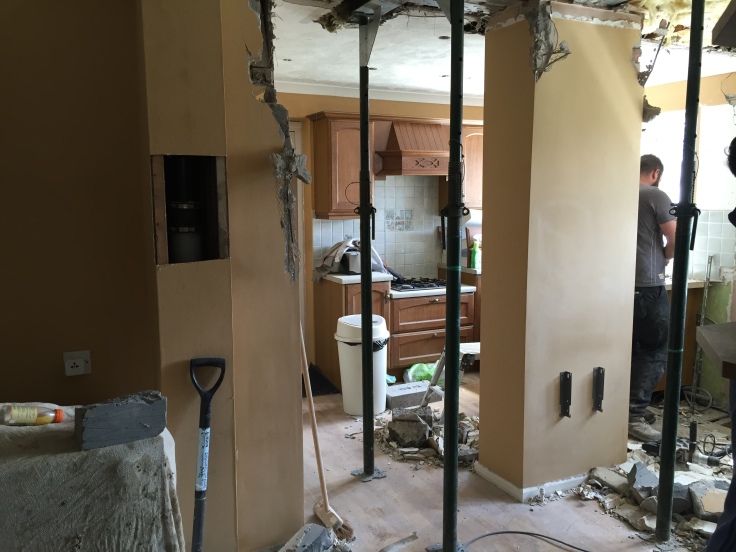 The full kitchen was propped up with acrow props so they could knock the wall down. I was a nervous wreck watching this! I just had visions of the whole house collapsing once this wall was gone … such a typical girl but even hubby was wincing watching the last few bricks coming away! 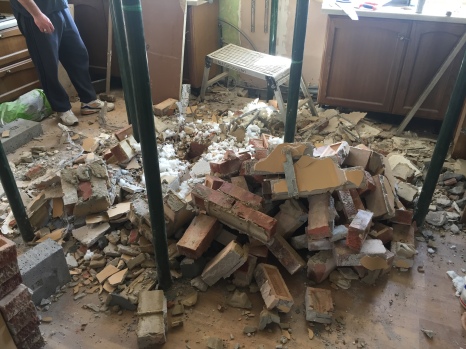 Hurrah! The wall was down and the house is still standing! Time to get the steel put in. I didn’t stay to watch this part. I just wanted to come back and see it all done. I wouldn’t of been much help anyway with my constant oohs and aahs!! 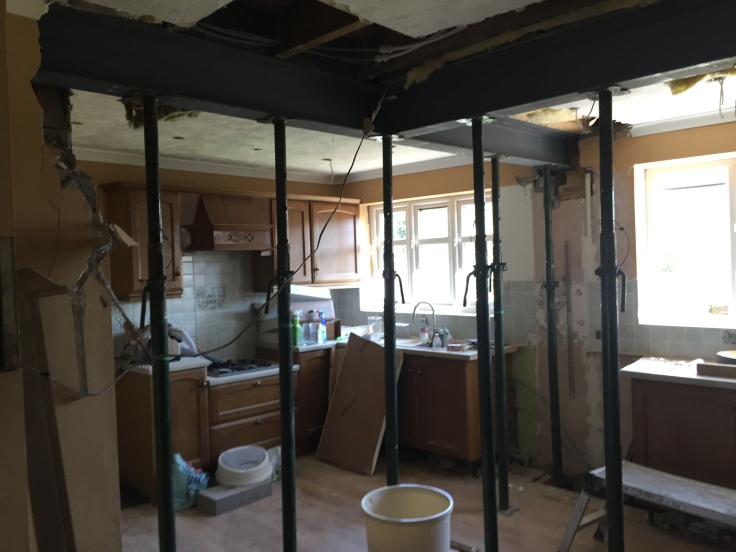 The steel was in place at last but they still needed to build up the bricks underneath it to hold it up. The part in between the window needed packed out with new blocks right to the floor so that’s why this part sticks out a little further.

Once the props were taken out, what a massive difference!! It felt so much bigger!

Now the old kitchen was completely ripped out …. blank canvas… well sort of…..

New ceiling and boxed around the steel lintel 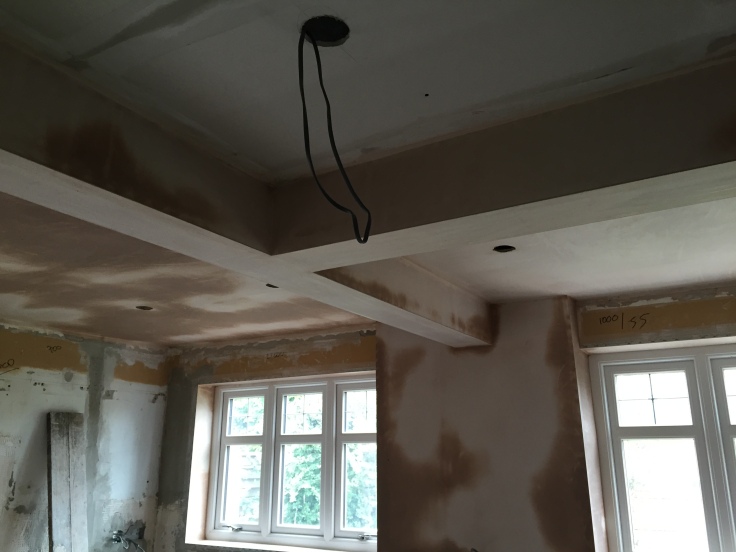 We had it built out and boxed around where the breeze blocks were to make it one straight wall in between the windows and new spotlights installed in the ceiling.

We bought our kitchen from Howdens. I always knew I wanted white gloss cabinets, ever since I’d seen them in a show home about 2 years ago. They came straight out to measure up and quickly came up with the design. We only made a few small changes and were ready to go ahead. Howdens have everything in stock so no need to order anything in, it was ready whenever we were. TIP – Once we had the drawings of our kitchen and knew the design and what cabinets we needed, we took them to Magnet. They looked at what we needed and then beat the price. We then took Magnets price back to Howdens and they beat it again! We were already happy with the original price, but for a little more work we saved about £800! Everyone is competing for business so shop around. 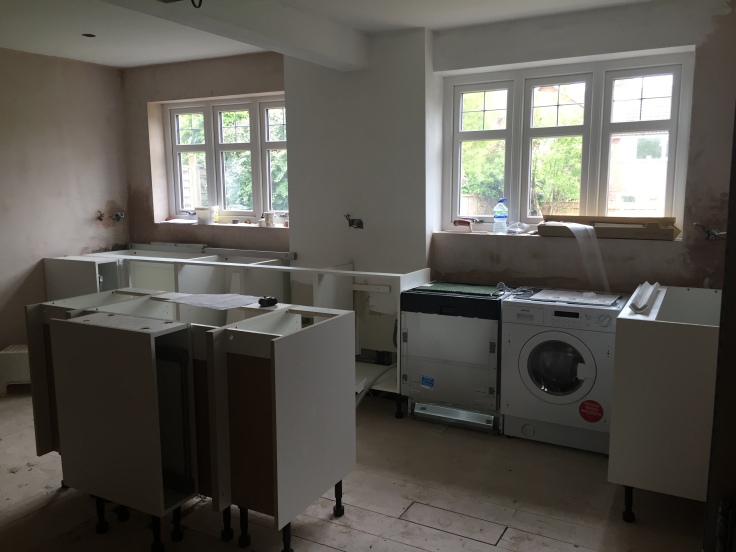 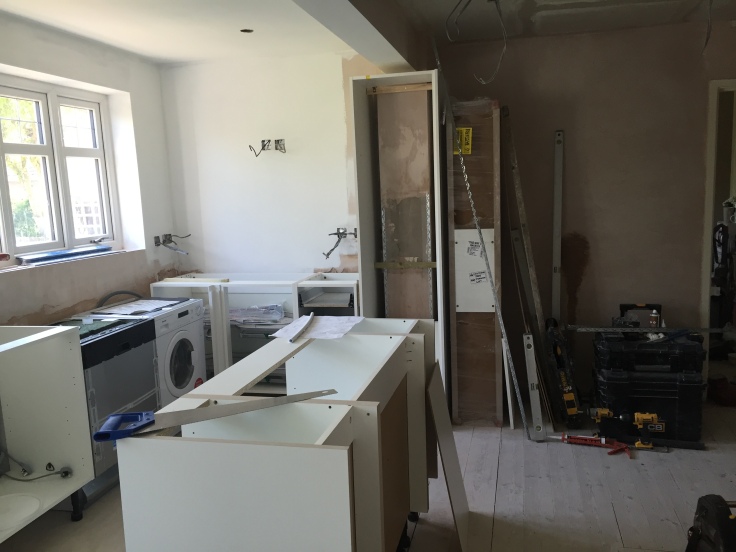 We knew we wanted a TV to go in the kitchen, so we had the electrician put in a socket and ariel on the wall so it would be hidden. 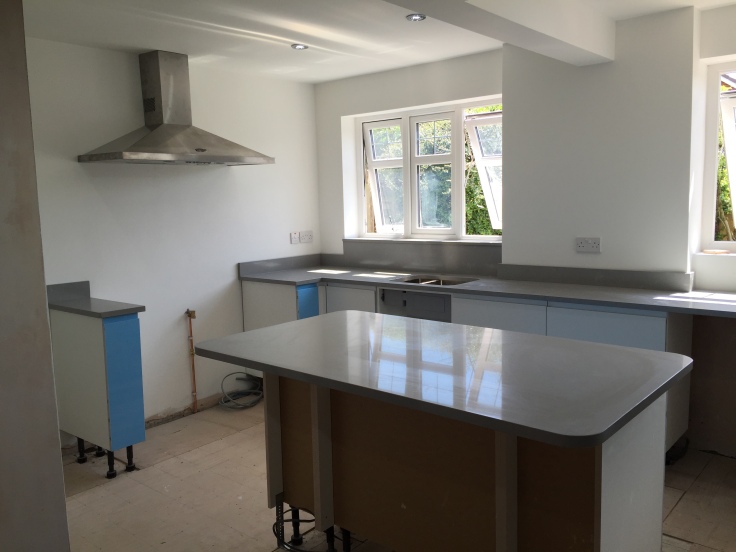 We mentioned to Howdens that we wanted to go for granite worktops. They suggested a local granite warehouse to us, so we took our measurements to them to get some prices. I told the guy what I had in mind and he took us straight to this one. We both loved it so much! The price we were given was a welcome surprise after what we’d been told to expect in most of the major kitchen shops we’d been shopping in before. Because of this we decided to go for the extra up stands and windowsills. I’m so pleased we did as I think they make a big difference. 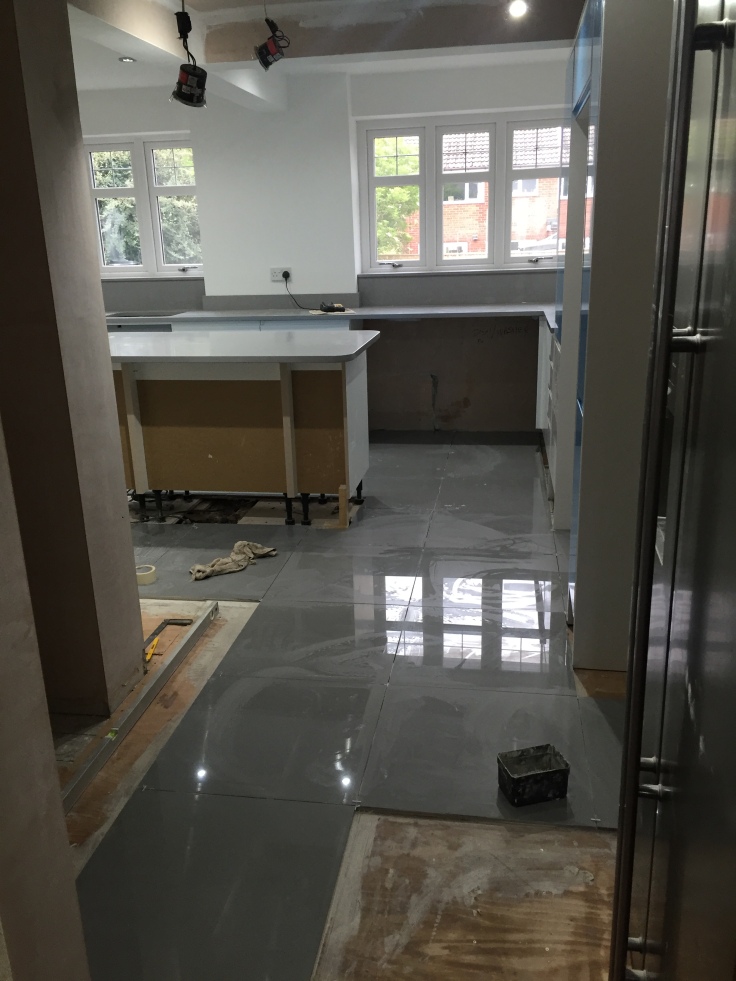 Our floor tiles are from Wicks (Find them here)

Again I’d seen high gloss tiles in a show home and knew that’s what I wanted. In hindsight I probably wouldn’t have them, only because they’re a nightmare to keep clean. They come up beautiful after they’ve been mopped, but it doesn’t last long. It’s a daily job to keep them gleaming!

As hubby is the main cook in the house, he had full say over what type of hob/oven we had. He’d always had his heart set on a Range cooker, so we had the kitchen designed with enough space for a big range cooker. It certainly gets plenty of use and having two ovens is always a bonus when we have people round. The Extractor is also Rangemaster, but the splash back we bought separately. The price for a Rangemaster one was silly and it doesn’t even have the logo on anywhere, so we decided to get one custom made from a company online. We brought our fridge/freezer with us from Australia, and the built in dishwasher and washer/dryer are from Curry’s.

So here is the finished room! I have changed the accessories in here so many times since we finished it. I think the clock is the only thing that’s stayed since the very beginning. We still haven’t changed the sockets to chrome yet, that’s one thing I wish I’d thought of when we had all the work done but it never crossed my mind. 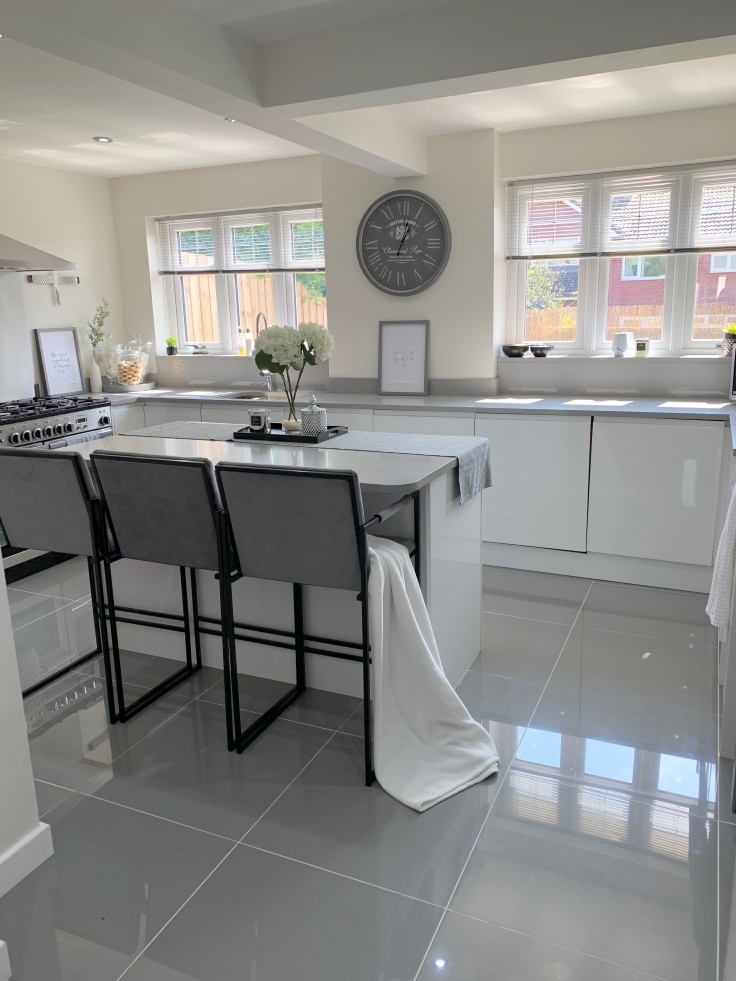 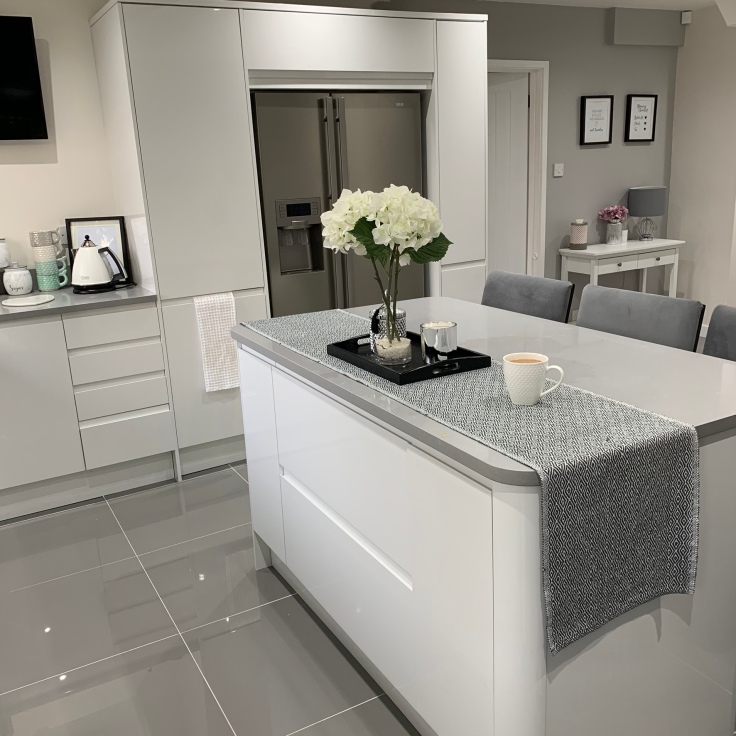 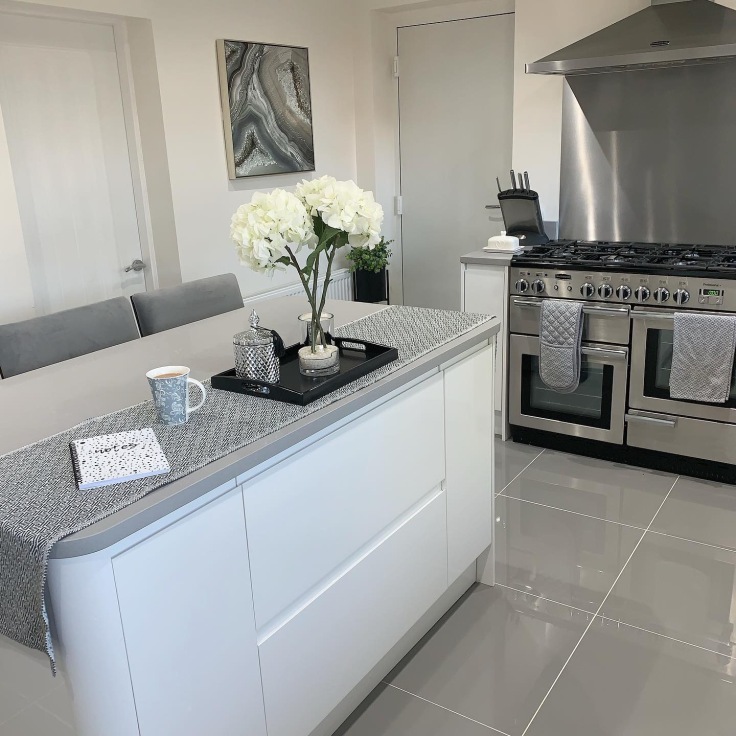 Would love to know your thoughts 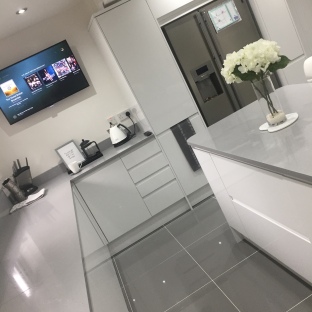 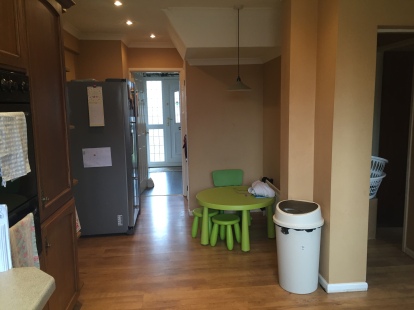 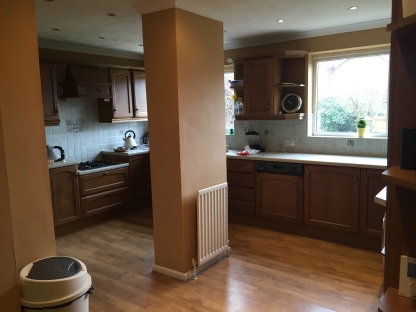 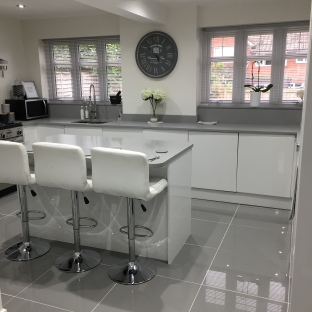 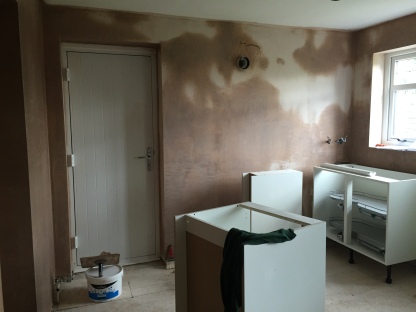