This isn’t something I often share on my Instagram page, but the outside was just as important as the inside, and most of the external work was completed before we started on the inside of the house.

This is the original house from the outside: 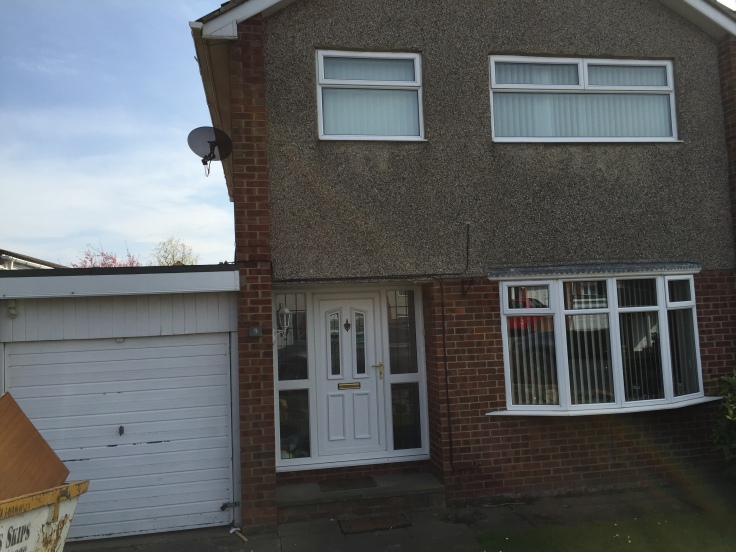 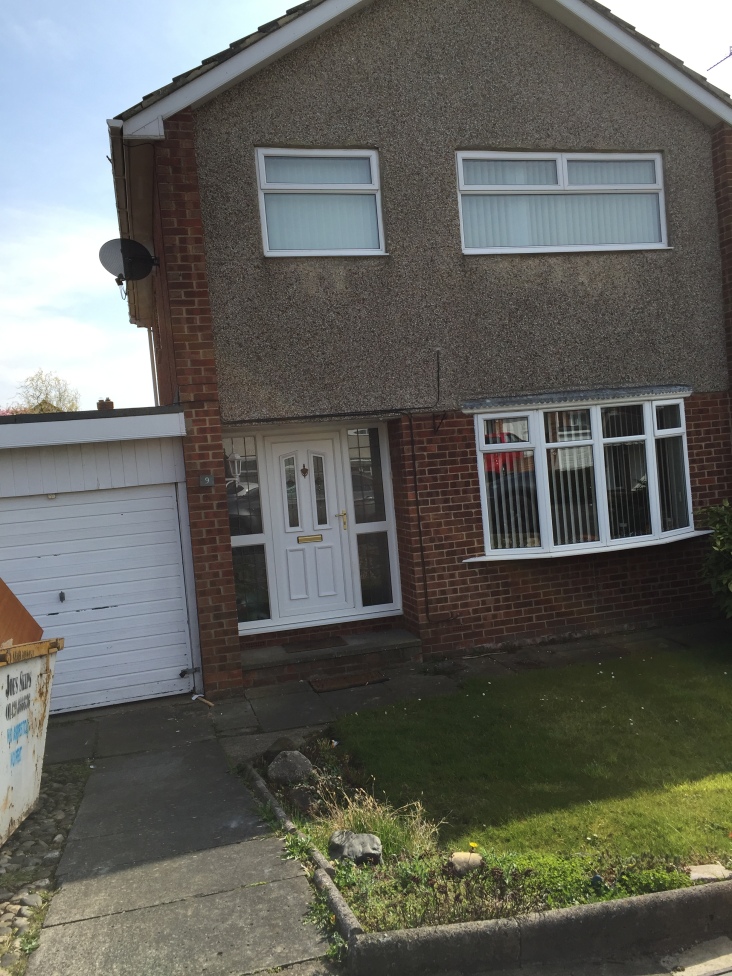 The first thing we had replaced was the Garage door as it was broken and wouldn’t stay up, then we had the windows and doors replaced. I’d always said I wanted a black front door so we stuck with that and opted for a black garage door too.

Already looked so much better with a new garage door.

The next job was the windows and doors, we decided to go for windows with a silver cross in the top section, I’d seen lots around where we live with white, but thought it was worth an ask if they could do them in silver as it would look much smarter. 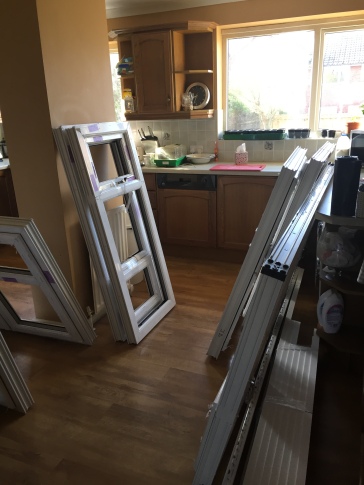 Throwback to the old kitchen here! All the windows were delivered and needed to be stored in the Kitchen, good job the guys worked quick and they got the whole house done in just 1 day. 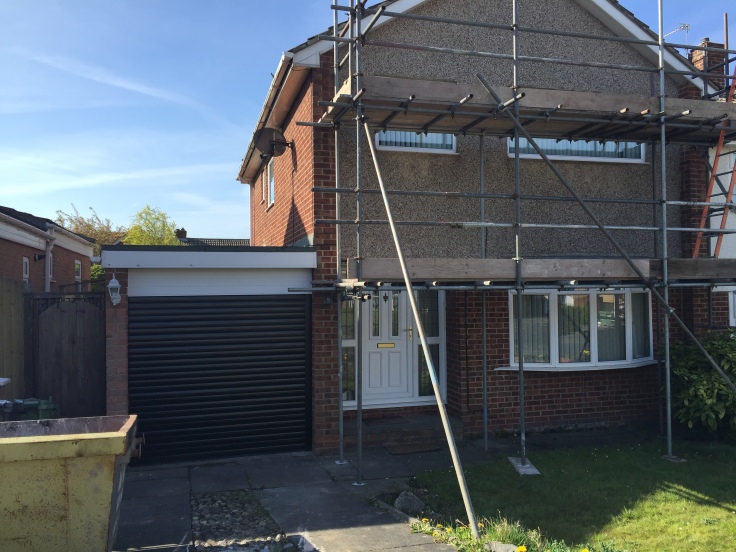 We decided to get the front of the house rendered, so they came to put up all the scaffolding a few days before they were due to come, which was handy for the window fitters. 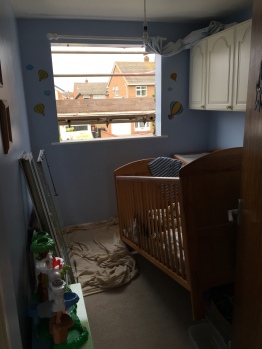 You can expect a lot of mess when getting windows replaced, and not to mention a freezing cold house! The kids went out while this went on and I never took my coat off all day long! As you can see this was before we did any changes inside the house, all the rooms have the original decor from when we bought it.

So now the new windows were in, and finally the guys were here to make a start on the render! All the pebble dash from the front had to be removed before they could put the render on. 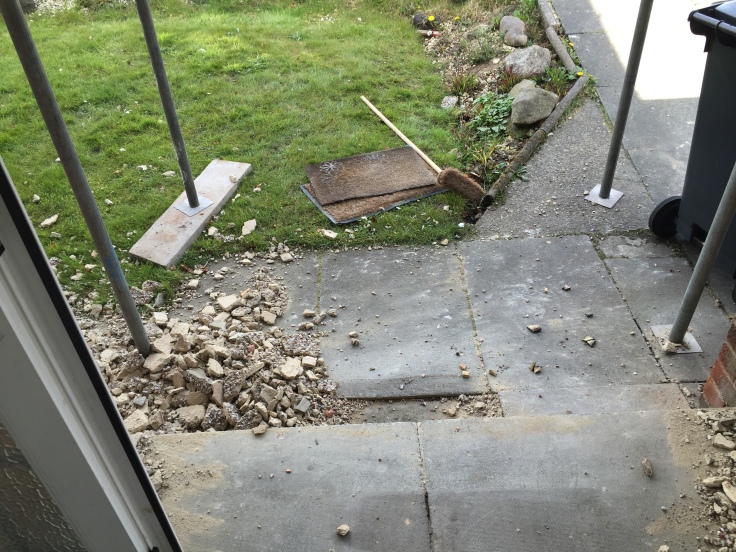 It’s a coloured cement based render with a surface that looks similar to weathered stone when finished. They put it all on one day, then come back the next day and scratch it back. Also another unbelievably messy job, The dust that comes off was just everywhere!! It looks dark when it goes on but drys lighter in a few days.

Here is the finished product once it was fully dry and all the scaffolding was taken down. You can see we’d only installed the downstairs blinds when this photo was taken, I chose my blinds based on how they’d look from the outside, I think Venetian blinds look great and give lots of character to the windows. I wasn’t a massive fan of the vertical blinds that were in the house when we bought it, they remind me of office blinds, not to mention they had gone so yellow over time! I couldn’t wait to put in some bright white ones!

We had a few local companies come round to give us a quote for blinds, the cheapest one we had was still £800 and that was only the windows in the front of the house! I couldn’t believe it! So I took to google in search of white Venetian blinds. I found The Blinds 2 go website and was so thrilled with the prices they were quoting, we ordered all the blinds from there and even got one for the hallway for half the price. My dad installed them all for us and it was really easy, not to mention I’m so thrilled with the quality!

Still never took a photo once all the blinds were installed, but here is a better photo of the finished house complete with new outside lights either side of the garage. 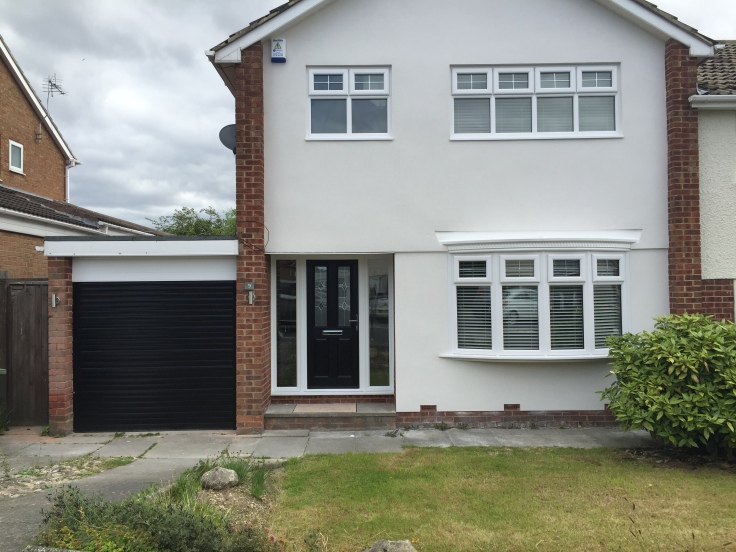 Next on the list was the garage roof. We had this done in Nov 2017, so bare with me as the photos are extremely dull.

It looked so bare and didn’t offer much to the house so we looked into the possibility of having a pitched roof built on top to add some more character to the house. 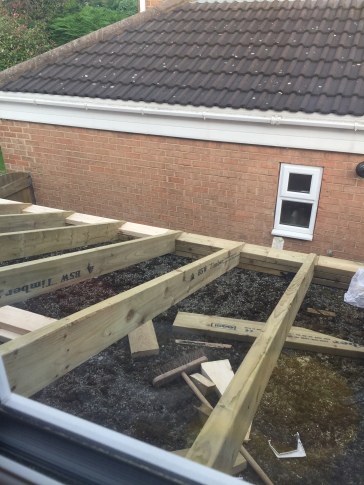 This still always makes me laugh… when the guys were cutting all the wood for the roof, it was the same day we had that really red sun in the sky which was caused by all the dust coming over from the Sahara, do you remember that? Well with all the wood cutting going on, lots of it blew over and onto our neighbours car. The next day I happened to be outside to overhear them chatting at the car saying “eee I can’t believe all this has come from the Sahara and landed on my car” We chose grey ridge tiles for the roof. Knew I’d even get a little grey on the outside 🙂

So here it is with the finished roof. The pictures are a bit dull, but we haven’t had any beautiful sunny mornings for months to take some photos. We only finished the garage roof in October 2017, that was an additional job that wasn’t a complete necessity in the beginning. I wanted to keep the grass and re do the rest, but the grass has been destroyed with all the workmen/tools/building materials that have been laid all over it so I think we’ll be going with the Husbands idea to get rid of the grass and pave everything! At last the driveway has been finished and the outside of the house is complete. As mentioned earlier, Last summer the driveway didn’t look too bad and the grass outside was quite nice, but with all the work we had done it just got destroyed and we also had a water leak which flooded the front grass, killed it all and the lovely bush in the corner. The only option was to get rid of everything and have it paved. 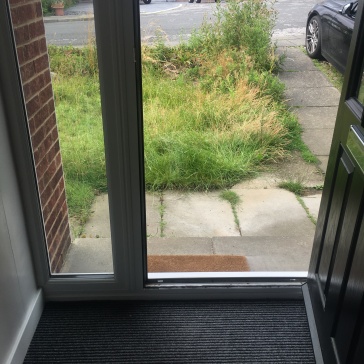 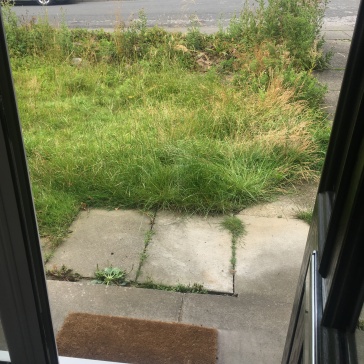 So admittedly when we knew we were going to get the driveway done we decided not to bother cutting the grass, but we got pushed back quite a few weeks and so the grass and weeds got a little out of control !… 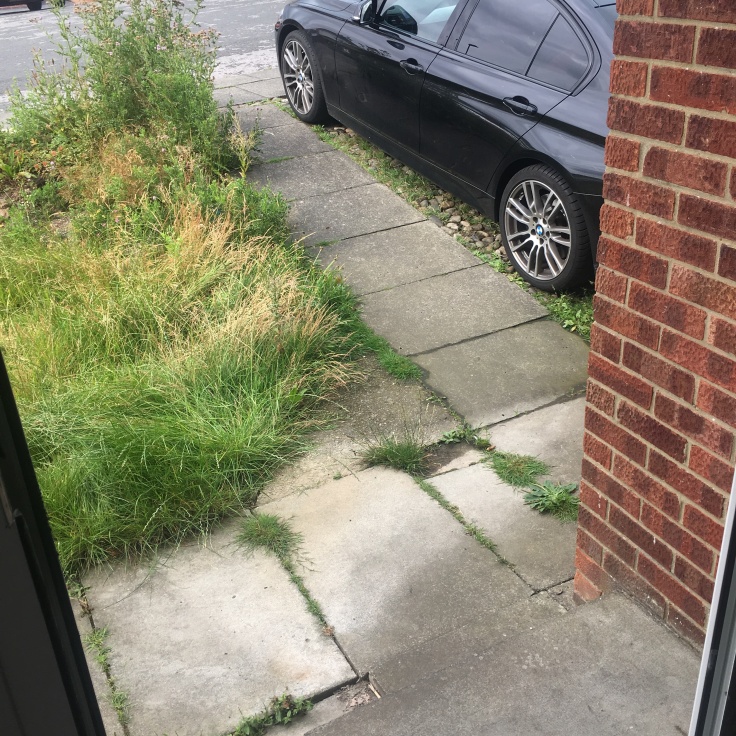 As you can see there were so many different levels/types of concrete, it had a really drastic slope and a big patch of overgrown grass and weeds.

I loved this bush in the corner but when we had the water leak it killed the bush so it had to go. 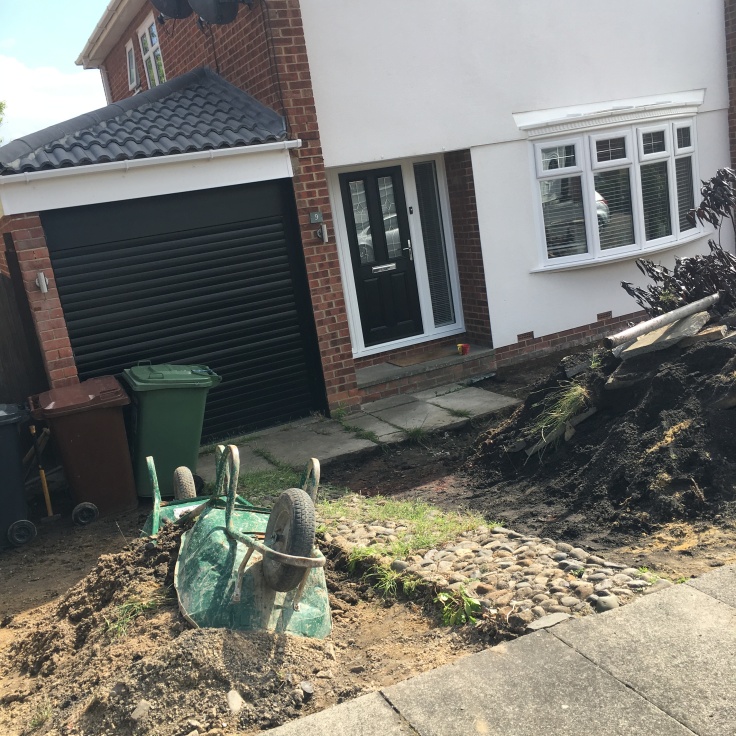 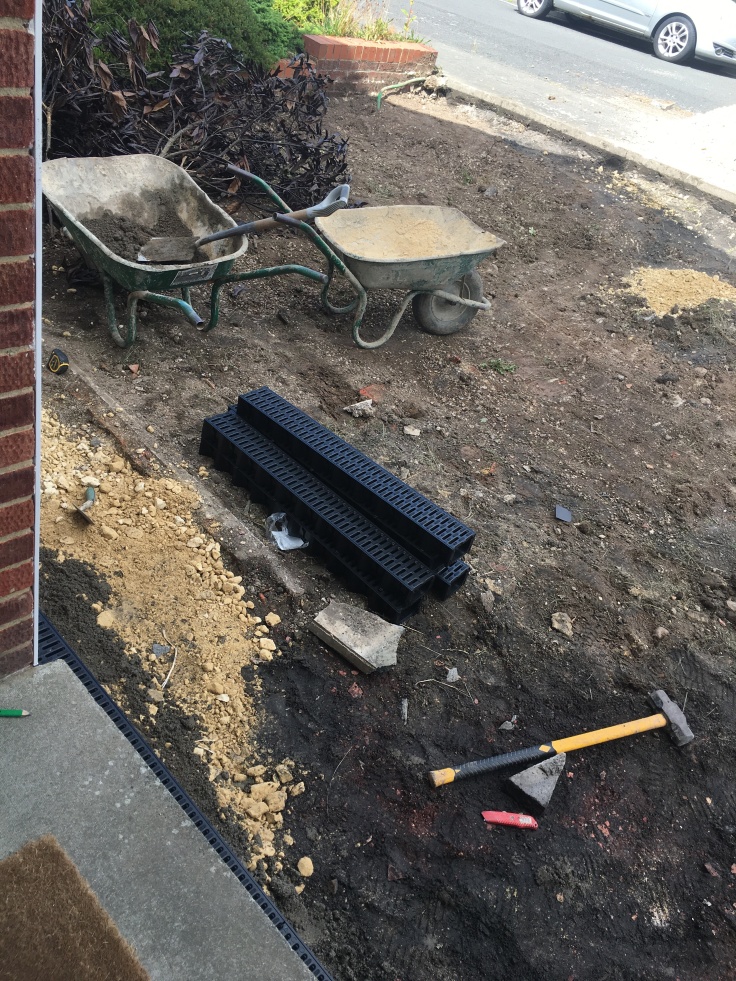 Because of the slope on the drive the rainwater would always be an issue and always has been, so we had drainage put in along the way along the front of the house and along the garage. We’ve had so many things damaged in the past from the rainwater running down the drive and into the garage so this will no longer be a problem. 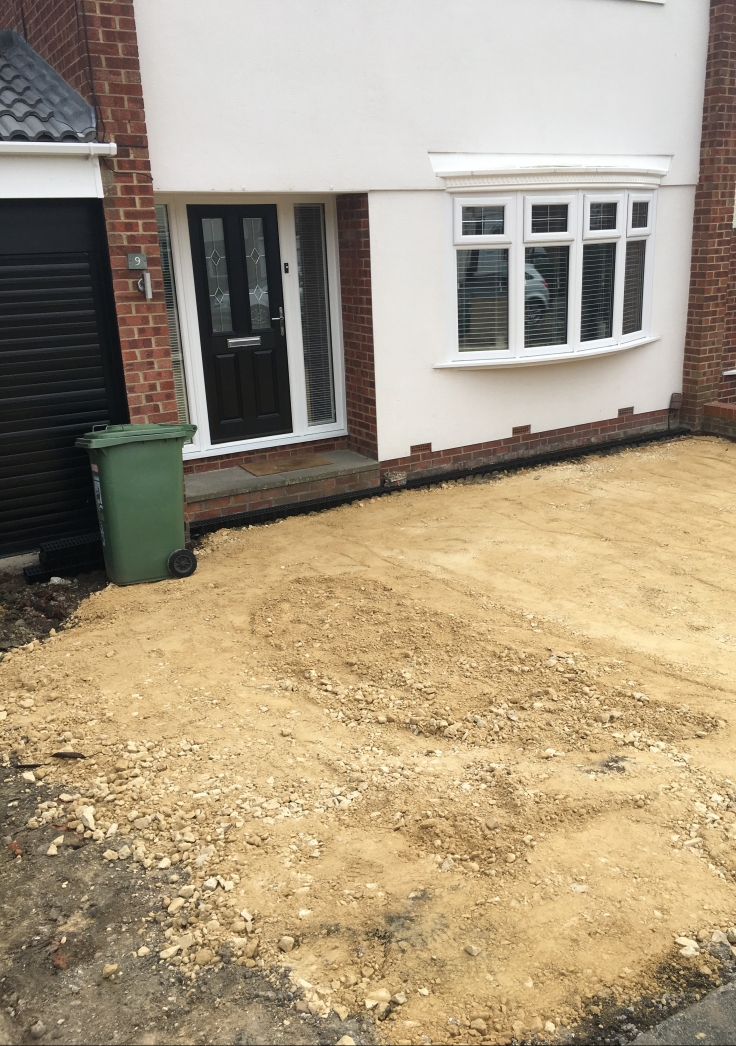 The amount of sand they thought would be needed was way off when they realised just how much would be needed to build it up level to the top of the drive. Even though they said they could do it and you would never even know there has been such a steep slope and such a drop down on the grass area, I never believed it. Once I saw the sand going down I started to see how it would all come together.

It was already looking so much better.

We decided to go for a charcoal grey colour block, which I’m really pleased with. 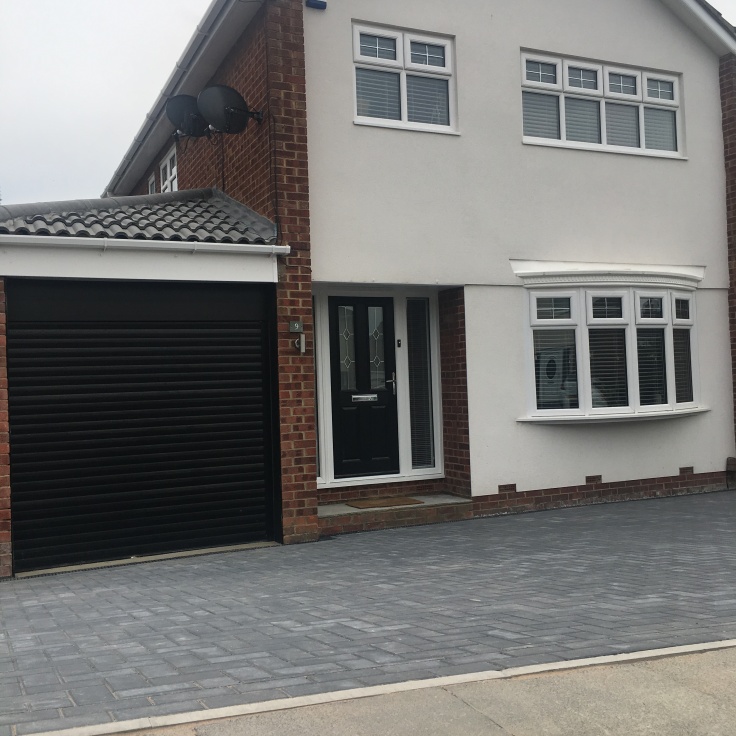 And here it is all finished….. Sorry for the dull photo, the weather has not been in my favour the past few days. It’s unbelievable how much of the steep slope they’ve taken away and now if needed we could actually fit three cars on the driveway. I’m so thrilled with how its turned out and now the outside of the house is complete!